It took a lot of controversy, hard feelings, and smack talk but Terrell Owens was finally inducted into the Pro Football Hall of Fame this year. Creating himself quite the stir once again, T.O. still receives his gold jacket regardless. The prestigious award of being selected for the Hall of Fame is definitely well-deserved for Owens. Right under Jerry Rice, his statistics speak for himself.

Trying to say “There will never be another T.O.” is only partially correct. Granted there may never be someone with the personality or ego as Terrell Owens, but there is one player currently in the NFL that statistically matches up with T.O.

Larry Fitzgerald has quietly created himself a first-ballot Hall of Fame kind of career. Entering the 2018 season at 34 years old, Fitzgerald has accumulated 1,234 total catches, 110 receiving touchdowns, and holds 15,545 total career yards. Yup, you read that right. Larry Fitzgerald is only 389 yards shy of breaking Terrell Owens’ career record of second-most receiving yards of all time — and he’s going to do it this year.

Normally the creative minds who come up with the NFL schedule each season have these types of statistics on lock-down on when the probability that athletes will be able to break a career record of this magnitude. Taking a quick peek at the Arizona Cardinal’s schedule, fans get three opportunities to watch Fitzgerald overtake T.O.’s record in primetime.

He could accumulate 400 receiving yards by week three against the Chicago Bears as the Game of the Week. Just in case Fitzgerald has a slow start to the season, history could be changed in week five versus the San Francisco 49ers on another Game of the Week slot. Just to add to security, the Cardinals have one more shot against the Denver Broncos in week seven on Sunday Night Football. 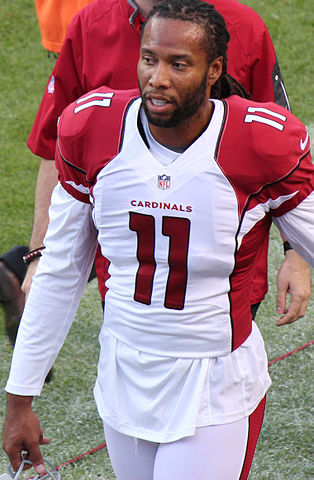 Larry Fitzgerald will most likely never be able to break Terrell Owens’ touchdown record. He has already accomplished more receptions and about to take the seat right under Jerry Rice’s wing for most receiving yards. By the time Fitzgerald retires, there will be no question he is a first-ballot hall of famer. His statistics can’t lie, and he has already won the appreciation of fans and judges by his humble personality and shining work performance. Fitzgerald will never brag about his numbers or accolades for his career, but a gold jacket will never fit a better candidate.

For a good portion of the decade, there has been lousy football coming from the same three teams. The Cleveland Browns (0-16) had their last win in the 2016 season with Johnny Manziel as their quarterback. That feels like a lifetime ago already. The Chicago Bears (5-11) have notoriously been a two or three win team ever since losing the NFC Championship in 2010. Then comes the San Francisco 49ers (6-10) who has had a roller coaster ride all decade. Ever since losing head coach Jim Harbaugh the 49ers’ wins have been lacking.

The Bears and 49ers have already reached out of bottom feeder status as of last season. It’s no coincidence that acquiring Jimmy Garoppolo and Mitch Trubisky have helped tremendously. All three of these teams are currently heading in the right direction. The biggest question mark lies on the Cleveland Browns, coming from zero wins last year. Cleveland possibly has the most impressive roster we’ve seen in a very long time. Even four wins from the Browns would be considered a successful season at this point. With these teams currently on the rise to success, there can only be three new teams to take their place. What new franchise will take the dishonor of being the new bottom feeder? 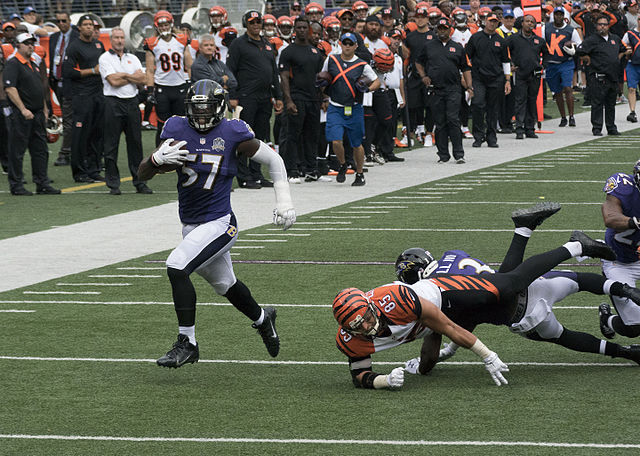 Only one thing prevented the Cincinnati Bengals from being the worst team in their division last year: the luxury of sharing the division with Cleveland. Last season definitely exposed some holes in Cincinnati’s arsenal. The Bengals missed every opportunity to pick up any top rated free agents to patch any of those holes. Most teams are becoming a running back by committee, and the Bengals have the same mentality. Between Jeremy Hill, Giovanni Bernard, and Joe Mixon they’re not sure which RB to use. The answer seems obvious: go with Mixon. There should be no doubt that Joe Mixon will eventually become a great running back. It will take longer to see results when he’s only allowed eight carries a game. 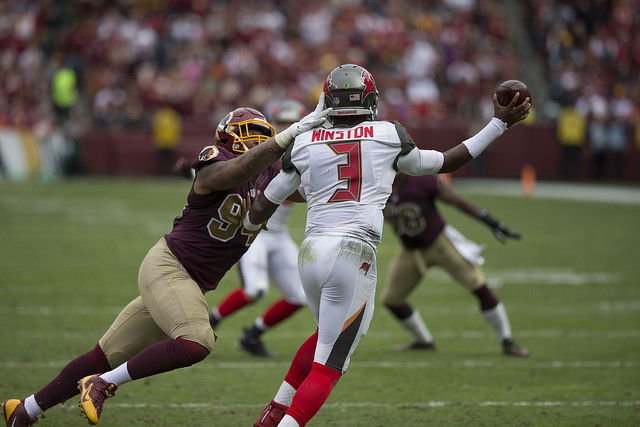 Tampa Bay has some pretty great weapons on their team. Mike Evans has always been a top wide receiver each year. Gerald McCoy and Kwon Alexander have been crucial pieces that can provide help on any team in the NFL. Jameis Winston has proven himself as a good franchise quarterback. He has the unfortunate circumstance of sharing the same division with Drew Brees, Cam Newton, and Matt Ryan. Winston is young and has plenty of time to hone in his talents. Despite all the pro-bowlers on the roster, the Bucs still have not been able to click into gear. Perhaps the blame should fall on the coaching staff. Tampa Bay is high on their first-round pick Vita Vey, a defensive tackle from Washington. Vey has high regards but still doesn’t fix their running back problem after releasing Doug Martin. 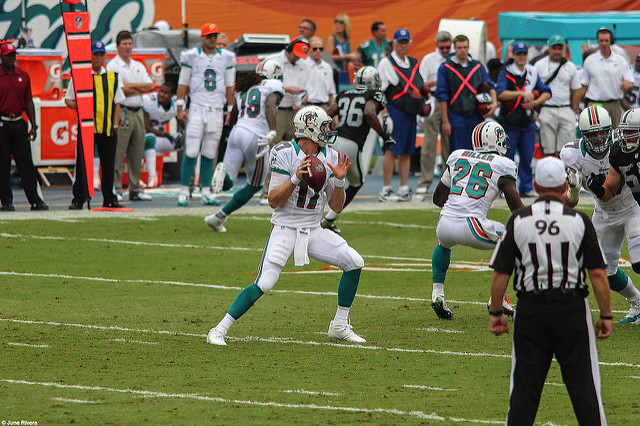 The Miami Dolphins have lingered on the border of bottom feeders for quite some time. Ryan Tannehill will be returning from his ACL injury this upcoming season. The Dolphins continue to believe in Tannehill being their starting QB, despite Adam Gase not achieving much success with him. Tannehill has fewer weapons to work with since Jay Ajayi and Jarvis Landry are no longer on the team. Minkah Fitzpatrick was a great first-round choice in the draft. Even the DB from Alabama won’t be able the save the problems Miami will face in the near future. Miami has a window of opportunity to build once Tom Brady retires from the Patriots. The competition will be severe as the Buffalo Bills and New York Jets are doing the exact same thing. With the Dolphins allowing their best players to be traded, there is a high probability that they could be the worst team in the NFL this coming season.

The story line was set up perfect for the Buffalo Bills to be successful on Thursday Night Football. Only a half-game behind the New England Patriots, they needed a win to potentially be in first place among the division once again. All the cards were in Buffalo’s favor — they were going in to week 9 with a 5-2 record, and their five wins weren’t just push overs. In week one they already beat the New York Jets, who were their opponent once again in week 9. Since then have continue to win over teams such as the Broncos, who the week prior had completely destroyed the fierce Dallas Cowboys. They upset the Atlanta Falcons while simultaneously snapping the Falcon’s win streak. They climbed over a lack luster Tampa Bay Buccaneers team last second to beat them by a field goal, only to reply the following week by steam rolling over the Oakland Raiders. Buffalo’s only losses coming in to week 9 came from the Carolina Panthers, who have been pretty hit or miss this season, and a very confusing loss to the Cincinnati Bengals. With their past set up, they came in to the Met Life stadium as the away team, and with one win already against the Jets. Considering that both teams are from New York, the travel time wasn’t a big deal for Buffalo. It was clear that the fans travel well with the team, as the cheers were loud and clear echoing throughout the stadium when the Bills took control of the ball. Their motivation and identity was at an all time high, as a win this week would have put them at 6-2; a record that the franchise have not seen since 1999. Despite having the stage set up for the Bills to take a hold of their own destiny, and  Las Vegas giving them a four and a half point advantage for odds, Buffalo does what they do best by embarrassing themselves.

Buffalo’s record still isn’t bad despite the loss. At 5-3 they’re surprisingly still one of the top teams with most wins in the NFL right now. It makes things still a little nerve-racking considering that the Bills currently have the longest playoff drought in the NFL, and unless they go on a massive win streak soon it might not be enough to even be a wild card team. New England is still predicted to win the AFC East once again, and Buffalo being in second place doesn’t seem entirely secure because they’re about on pace with the rest of the NFL this year. The 2017 season is both bizarre and exciting mended together, because there are just a few top teams who are on a clear pedestal above everyone else, and then a few bottom teams who are laughably dragging behind the crowd. Buffalo sits among the rest of the NFL — all wading in a pool of average mediocrity. Nobody in this purgatory is necessarily horrible nor great, and any time a rhythm begins to muster among these teams, the beat gets disrupted by a disappointing loss. Going by the current records, the teams who reign on top are the Patriots, Steelers, Chiefs, Eagles, and Vikings. To parody the top, there must be teams scavenging the bottom which include the Browns, 49ers, Colts, Giants, and Buccaneers. That means there are 22 other teams all floating right in the middle; clawing and crawling among each other to be a top contender only to get nowhere in the process.

There are still plenty of football left. Any one of the teams in the mediocre purgatory could finally catch that rhythm to fight their way across the rest and place themselves into a definite spot for the playoffs. Buffalo still has potential to be that team, but they will need to figure it out quick. The NFL is ruthless, and any other team can make a name for themselves to knock the Buffalo Bills out of the playoff contention. This should be a concern for them. It should be their motivation to create an identity and finally clean that tarnished drought they lay in. Now is the time to pick themselves back up and make it time for Tyrod Taylor to prove he can be a franchise quarterback for them. It can be time for Sean McDermott to shine, and make the city of Buffalo believe in their franchise again. Until that day happens, it might be a wise choice to hold your bets on Buffalo for right now.